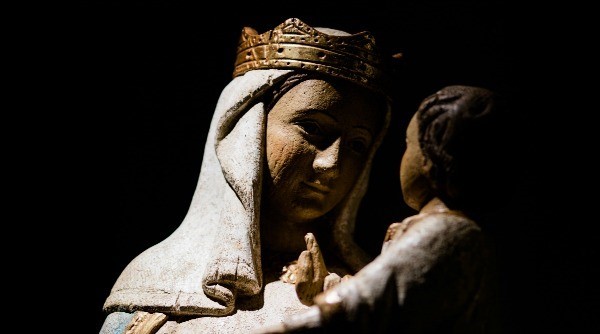 With the Word of the Father, the words of Christian prayer are born from the Virgin’s Womb. Such was the mystery of prayer learned first by the One who Believed as she felt Him ready to enter the world. It is not seized by force or mastered by practice. The result always exceeds expectation but can never be calculated. This prayer can only be welcomed as a gift and requires that humble reverence without which no love is ever possible. There is no other prayer that the human heart can offer that is given to us as this prayer has been given.

Just as she carried the Lord in her womb before His birth, every prayer offered in Christian faith also carries Him. Since her “fiat”, the Word of the Father has never stopped coming and with each advent, He prepares a new theophany whenever a heart says “yes” to Him. Each new word of prayer offered by faith in Him makes space for Him to be born and opens unseen human poverties and miseries to Divine Peace and Glory.

As she waited for that first Christmas, filled with wonder, the humble Handmaid knew the mystery first conceived in her heart by obedience would soon be heard and seen in the shadow of the Almighty. She must have been amazed that the very vulnerability of His prayer, even when only an infant’s cry, would pierce the heart of the Father and unveil the deep things of God. Her mind must have bathed in astonishment over how His prayer would echo at the center of human history and in every human heart. Did she guess by the way it drew her that His prayer had the power to draw all men back to all that is noble and true about humanity, and to all that is good and tender about God?

She must have wondered over that mysterious silent love by which He raised His Heart. If she felt this in her womb, could she see with her heart that His canticle of love would not be dimmed even when He suffered death? She nonetheless believed that the humble glory of his unvanquished petition would make powerful knees bend and haughty heads bow down. By the invincible hope of His cry, she still rejoices that the prayers of those who believe stand in the midst of hardship and shine brightly against the darkness.

It is possible to learn such prayer in these finals days before Christmas. These are words that are learned by an obedience that suffers, progresses and dies in love just as He did.  The Man of Sorrows is the Way that prayer must walk if Christian faith is to attain what it seeks. The Just One is the Truth who makes true the desires of the Christian heart. The One Crucified by Love is the life for all those who, by prayer, die to themselves and live no more this earthly life. A wondrous gift is offered in the simple surrender that would turn again from sin, persevere in love and invoke His Name; and that prayer that amazed the Mother of God becomes also the prayer coming to birth in the heart.

Image credit: detail of photo by Grant Whitty on Unsplash