On the Feast of the Holy Spouses 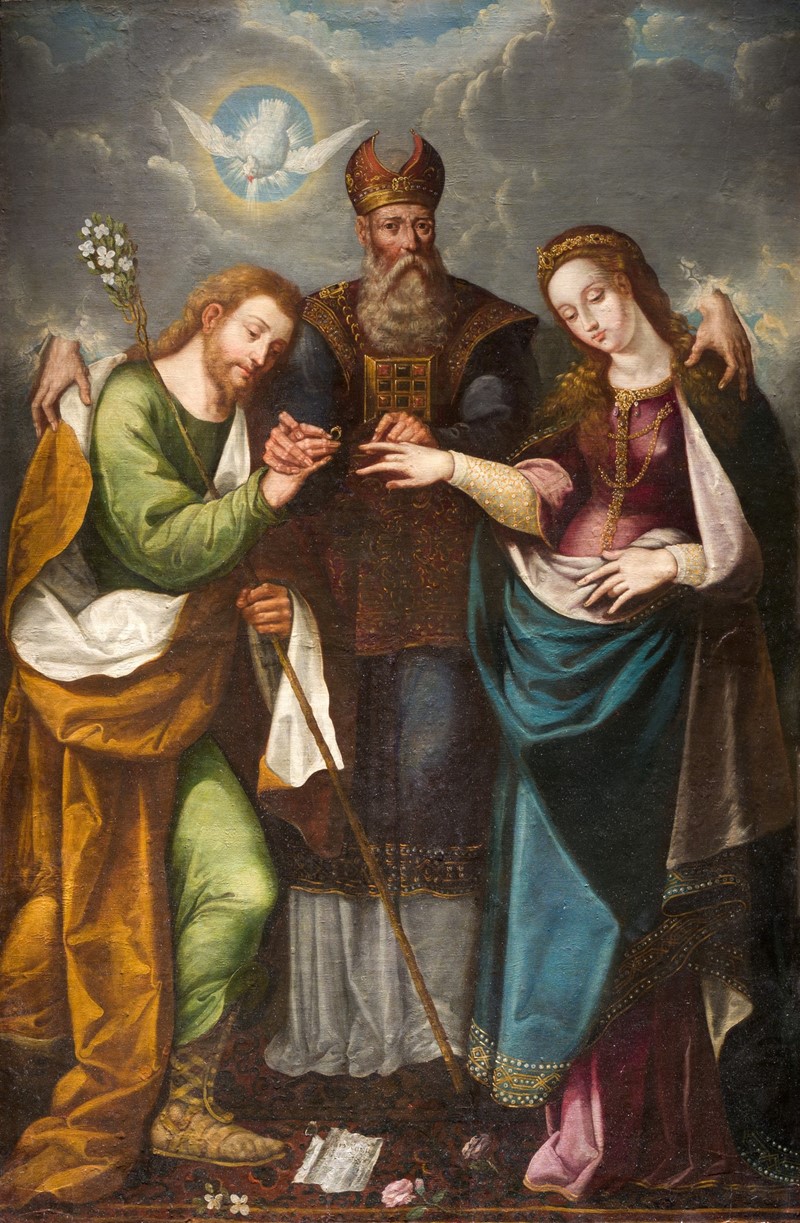 Holy Father, who joined together by a virginal bond the glorious Mother of your Son and the just man, Saint Joseph,
that they might be faithful cooperators in the mystery of the Word Incarnate,
grant, we pray, that we who are united with you by the bond of baptism
may live more intimately our union with Christ and may walk more joyfully in the way of love.
Through our Lord Jesus Christ, your Son, who lives and reigns with you in the unity of the Holy Spirit, God, forever and ever.

--Collect from the Feast of the Holy Spouses

The Feast of the Holy Spouses, also known as the Feast of the Espousals of Mary and Joseph, is an ancient feast celebrating the marriage of the Blessed Mother and St Joseph. Although it is not a part of the universal calendar--in the Novus Ordo or Extraordinary Rite--it has been celebrated by various religious congregations around the world for centuries, going as far back as the 1400s. In 1989, the Oblates of St Joseph reintroduced the Feast into the congregations calendar, and propers for the Mass were written and approved.

This Feast celebrates the holy marriage of St Joseph and the Virgin Mary and upholds married life as a path to holiness. We, here at Apostoli Viae, have chosen this Feast as the date on which members consecrate (or reconsecrate) ourselves to St Joseph, foster Father of Jesus and husband of Mary.

As His Eminence Raymond Cardinal Burke stated on January 10, 2015, during a homily given at a Votive Mass of the Espousal of the Virgin in the Basilica of San Nicola in Carcere in Rome,

“we see in the marriage of Mary and Joseph, in a most remarkable way, the beauty of marriage, established by God at the Creation and restored to its original perfection by God the Son Incarnate at the Redemption.”

As St John Henry Newman says in his "Triduo to St Joseph":

He was the true and worthy Spouse of Mary, supplying in a visible manner the place of Mary’s Invisible Spouse, the Holy Ghost.
He was a virgin, and his virginity was the faithful mirror of the virginity of Mary.
He was the Cherub, placed to guard the new terrestrial Paradise from the intrusion of every foe.

His was the title of father of the Son of God, because he was the Spouse of Mary, ever Virgin.
He was our Lord’s father, because Jesus ever yielded to him the obedience of a son.
He was our Lord’s father, because to him were entrusted, and by him were faithfully fulfilled, the duties of a father, in protecting Him, giving Him a home, sustaining and rearing Him, and providing Him with a trade.

V. Blessed be the name of Joseph.
R. Henceforth and for ever. Amen.