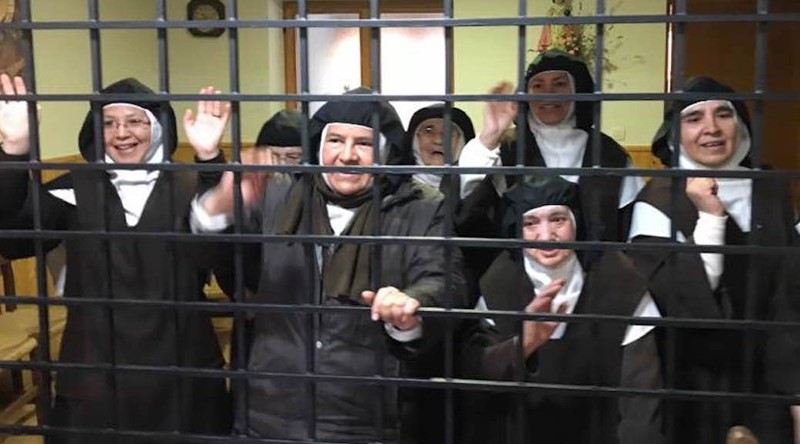 The feature image of this post captures the joy of hearts completely immersed in loving God through the charism that God has called them to. In this case, the Carmelite nuns of Palencia Spain, with love overflowing towards us as visiting pilgrims, expressed the grace and vigor of their charism through their joyful generosity and the promise of their prayers. The powerful charism that echoes through the love of these holy women has turned the hearts of millions to God.

What is a Charism?
A charism is a gift of the Holy Spirit given in a particular way to an individual or to a group for the purpose of building up the Kingdom of God, for the good of the Church, and the souls of those engaged in the charism.

When it concerns a group, a charism is understood to reflect the distinctive spirituality of the founder or foundress of a religious institute, which then distinguishes a religious family from other forms of consecrated life approved by the Church. A charism is the personality of a religious community bequeathed by the founder. According to the Second Vatican Council, a charism is “the spirit and aims of each founder [which] should be faithfully accepted and retained” (Perfectae Caritatis, 2). In the case of these beautiful souls, their foundress is St. Teresa of Avila.

What is a Club?
In contrast to a charism, a club, as defined by Merriam-Webster is “an association of persons for some common object usually jointly supported and meeting periodically.”

Charisms and clubs have some similarity in that they both have regular meetings, requirements for association, and a particular purpose for the association. However, clubs are a far less consequential form of association in that their membership requirements have little to do with the essence of who the members are, or the way they live their lives.

Said another way, clubs meet regularly and have requirements, but they are a far less significant form of association than those inspired by the Holy Spirit for the building up of the Church. Clubs are inconsequential to who the members are in their essence. A charism like Apostoli Viae, for its members who are called to a lifelong association, is essential to their spiritual identity.

A charism should be conceived of in a similar vein as a religious order (as with our Carmelite nuns above). In this respect, one area of confusion emerges when religious orders and their “third orders” or lay associations begin to lose the distinctive fire, conviction, and clarity of their founder and degenerate into something that looks and feels more like a pseudo-spiritual club. Accordingly, their members live as if the association is not central to how they live their daily lives - because it is, in fact, not central to their lives. In this unfortunate situation, the once vibrant life-changing charism has lost its fire and has little impact on its members and thus has degenerated into a kind of religious club.

Some might be tempted to argue that religious clubs are a good thing. They turn the attention of their members to good and occupy them with good. Though I don't wholly deny this argument's validity, another perspective, one that I hold, is that religious clubs are more damaging than secular ones (that have a positive purpose). Why? Because there is a kind of pretense that the members are following their founder when they are not. The human person has an infinite capacity for self-delusion. The road to heaven is narrow and difficult according to Jesus. Self-delusion regarding one's goodness or spiritual progress because of association with a spiritual club inevitably leads to a kind of self-satisfaction and complacency. Jesus spoke to this problem in Revelation 3:15-16, "I know your works: you are neither cold or hot. Would that you were either cold or hot! So because you are lukewarm, I will spit you out of my mouth." He goes on to reveal that those to whom He offers this stern warning are self-satisfied and self-deluded.

What Would It Be Like to Follow St. Teresa of Avila or St. Francis of Assisi in their Time?

This dilemma between club and charism often arises within those who are part of a spiritual club and then they discover Apostoli Viae. It is common to hear (just for example sake), "I am a third order Franciscan, can I also be a member of Apostoli Viae?" For purposes of our reflection here, this dilemma does help to make these distinctions more clear. For example, consider what it would have been like to truly follow St. Teresa of Avila when she was leading the Carmelite reform that our nuns in the photo follow with vigor. What would have happened if St. Francis of Assisi was alive at the same time and in the same area? If one were to follow St. Teresa would they also be able to follow St. Francis? This example makes the case more clear because both are vibrant, living calls to specific and very distinct ways of following Jesus.

Of course, this request to follow both Teresa and Francis becomes an absurdity because of the profound distinction between the two spiritualities. Yes, they both follow Christ and seek to build up the Church. Yes, they can and have historically helped one another and at times worked side by side in common causes. However, the emphasis and unique charism of each follows a mutually beneficial but exclusive path. When vibrant and alive, each community draws the believer to follow the specific insights, teachings, and way of life of its founder. It would be impossible to follow both. With respect to clubs, we can be members of many at the same time because they don’t demand much of us. If we miss a meeting for one over the other, no big deal. However, it is a big deal if a pseudo-spiritual club draws a member to conflict if they also belong to a vibrant charism.

The Degeneration of a Charism
A charism degenerates into a club when practices and perspectives central to the founder become secondary or of lesser importance and association is merely a matter of regular meetings usually focused on administrivia or some watered down expression of the original spirituality.

As an example, a friend of mine recently completed six years of formation and was received fully and formally into a third order. The founder of this order considered mental prayer as absolutely central to the charism. Said another way, it would be unthinkable to the founder if any expression of their spirituality lacked a deep commitment to mental prayer – especially of a fully professed member. I was surprised and dismayed to discover that this friend was fully received but had yet to begin a daily habit of mental prayer!

How could this be when it was central to the founder? It came to be because the local expression of the order has lost its roots in the founder and has become a kind of dangerous spiritual club that requires little of its members. The spirituality they claim is, without doubt, life-changing when practiced as the founder intended. However, this expression of her group has lost the heart of the founder and has degenerated into a spiritual club that damages the perception of the charism because it offers an expression that in many ways radically denies the essence of the charism it pretends to represent. Even worse, it deceives the participants into the delusion that they are really part of something that can and will help them to deeper union with God and ultimately to heaven.

This deeply grievous degeneration of many orders has resulted in their members regularly inquiring into membership with Apostoli Viae. Because of our commitment to serving the whole Church, we wholeheartedly welcome all committed Catholics into relationship as Sojourners. However, to move into deeper association, one must be called and exclusively dedicated to the charism of Apostoli Viae.

Our charism is a calling into a community and life that invites our members to be fully immersed in our spirituality and apostolic work. We are deeply committed to Christ and to giving all that we are to Him. We are not a spiritual club. We are an authentic charism that calls for hearts of deep commitment to the Lord and the specific path revealed by the Holy Spirit that Apostoli Viae represents.

By God’s mercy, may we never become merely a kind of spiritual club but instead remain a vibrant force to bring about renewal and healing of the Church.