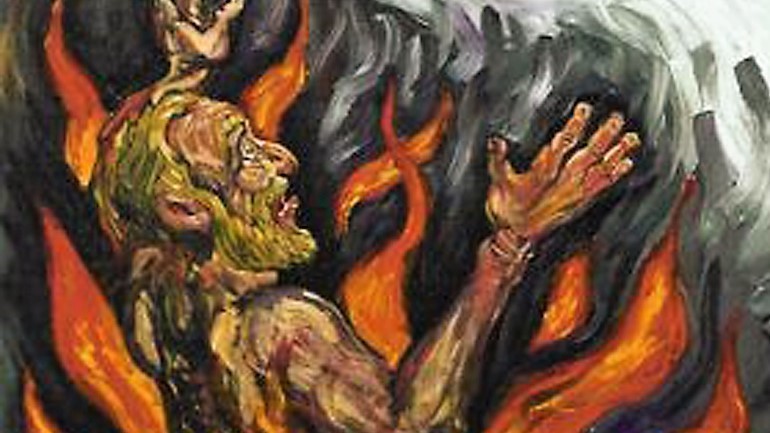 In the important article below, Dr. Grondelski explains the philosophical, cultural, and theological backdrop to a few important maxims that I regularly propose. This piece and these maxims are helpful to lead us to an important traditional reflection on the last four things as we head into Advent. Here are the maxims:

Unfortunately, these maxims, if we don't combat them, will lead us to hell. This is why we are so insistent that daily mental prayer and the examen are so important.

Hell is Real. People Really Go There. Why Modern Man Can’t Understand This…

by John Grondelski - Courtesy of the National Catholic Register

Hell has always been a difficult doctrine for some people. That’s why, throughout Christian history, some have tried to eliminate it.

Even in patristic times, the Fathers contended with and rejected apocatastasis, the view that in the end, everyone (including the devil) will be saved. For its proponents, hell becomes just a more intense Purgatory. Apocatastasis eliminates the eternity of hell.

Apocatastasis reappeared in the English speaking world around the 18th century as Universalism, eventually crystallizing into a Protestant sect that in 1961 merged with American Unitarians to form what is known in the United States today as the “Unitarian Universalist Association.”

What these trends had in common was an increasingly attenuated effort to eliminate hell within Christianity. Whether Unitarian Universalists can be deemed Christians is, of course, false: the earliest Councils of Christianity made clear that belief in the Trinity is sine qua non to being Christian. Prescinding from that issue, however, I think it fair to say that modern Unitarian Universalism has veered out of religion into “spirituality,” with all the contradictions that implies.

I also think that today’s “spirituality versus religion” problem has made the understanding of hell even more difficult for modern people. Why? Some reasons, in no particular order.

We don’t take judgment seriously. We don’t take judgment seriously because, deep down, we really don’t believe in reality. We think of God as having set up a bunch of rules—10 boxes to check—against which the Divine Enforcer arbitrarily decides our salvation or our damnation. Sometimes, we’ve even entertain parodies of “good God/bad God” – the Father with His Commandments, Jesus pleading our case.

Protestantism—which had an enormous influence on the American mind—didn’t help. When it came to the forgiveness of sins, classical Protestantism embraced a vision of “forensic justification.” Man’s nature is utterly corrupt by sin and that never changes, even with God’s grace. God’s grace does not heal, it covers up. Our “justification” is not real but imputed, like a judge who lets a guilty party off: the guy’s still bad, he just is not held to account.

Corrupt man is like a pile of dung. God’s grace is like snow. Falling snow covers the dung heap and cuts its stench. But don’t go tip-toeing through the tulips barefoot...

If we think of God’s grace not as healing and enabling us to live as God intended us to live, if we imagine it’s just a cover-up and a lucky acquittal on a technicality, then we don’t take judgment seriously.

But, as I recently argued, judgment is not fundamentally about laws. It is fundamentally about whether, at this moment in a human’s eternal life, I have or have not made myself, with the help of His grace, capable of a communion of persons with God. If heaven is a nuptial feast (Matthew 25:1-13), then judgment is whether or not you are capable of being the beloved, the bride.

And we know that some people exclude love from their lives. There’s a phase in many young people’s lives when friends and acquaintances start getting married and one is often part of wedding parties. And there’s sometimes the member that’s “always the bridesmaid, never the bride” — and everybody knows why, because, unlike Shakespeare, that shrew won’t be tamed.

Some of us refuse to be tamed ever.

Once upon a time, someone began a job after high school or college and stayed there until retirement. Anybody who envisions such stability in modern life would be asked what rock he was living under.

We talk about heaven in terms of a marriage feast (and, by extension, of hell as exclusion from the nuptial banquet, see Matthew 22:2-14) but our experience of marriage as something permanent is limited. “Till death do us part” is taken as poetry, not pledge—with no small number of “religious” ready to accompany those who persist in their breaking that vow. Sacraments as stages of commitment—baptism as existential choice, Confirmation as public Christian, marriage as committed spouse—are reduced to mere ritual moments. Humans have ever less experience of making a permanent commitment. Do we wonder, then, that they don’t understand why eternity is not eternal change?

If key events of our lives are increasingly impermanent, how will modern man understand the permanence of individual acts, discrete acts done in a limited amount of time? Our culture pushes us to compromise: do this, don’t do that, at least shut your mouth. Why are you getting so riled up about your “conscience” when all we want you to do is … pay for X’s abortifacient like you would pay for her mammogram? Send your patient who wants you to kill him to Dr. Y, who will? Bake a wedding cake for Adam and Steve?

Our culture sees acts in a purely utilitarian fashion: this deed gets something done here and now. Finish. Complete. Move on. It does not (or refuses to) see that my acts not just do things in the world, but make me into a given person (who then must present that me before God’s Judgment seat). No one has a right to make me do wrong, because no one else will answer for my life. That is why conscience is sacred.

(That utilitarian mentality about acts also affected some quarters of the Church. Those who advocated contraception in the 1960s, for example, maintained that individual acts of contraceptive intercourse had no moral meaning as long as “one’s overall intention” or the “general trajectory” of one’s choices was “open to life.” Again, human experience tells us that single acts matter: an individual act of ingesting arsenic is not meaningless as long as one does not make it a habit – which, after that one act is likely impossible to be repeated anyway).

Karol Wojtyła makes clear that our human acts are self-reflexive: they not only do things but they make me into a certain kind of person. Modern man has lost that understanding.

We don’t take the body seriously. We don’t take the body seriously because Western thought has marginalized the body, reducing it to something sub-personal while wrongly identifying the person almost totally with consciousness. That’s why we attribute far more importance to what we think than to what we do. And that’s why we think (and pretend) we’re pretty good when we do things that are pretty evil. As long as our intentions are called “loving,” we downplay our actions.

God, however, seems to do the opposite.

Christian theology affirms that the kind of person we’ve made ourselves into at death is the kind of person we are for eternity. As noted above, modernity undermines the notions of self-definition and permanence. But its undermining of the importance of the body also makes the fixing of our identity at death a problem to the modern mind.

Our identity is fixed at death precisely because death has broken the human person.

The human person is a body-and-soul unity. Body and soul together act; I make spiritual decisions, but I “enact” them, I make them real, through my senses, through my body. When that corporeal-spiritual unity is sundered by death, so, too, is our ability to change the person we have become. We are what we have made ourselves to be.

And that somebody now faces God, with whom we recognize or do not recognize a resemblance, a communion. And, with the veil of faith now stripped away and reality face-to-face, it’s settled. The General Judgment will change nothing, because I am who I am – and will be that person, body and soul, forever.

Because the soul is no longer joined to the body, the distractions of the world are less immediate, but the reality of whom I have become is more immediate. If I have become a person whose deeds (and not just intentions) were life-giving, faithful, true, obedient, worshipping, and honest—in other words, if “you have kept My commandments (John 14:15)—I am the loving person who has a communion with God. I am saved. If I have not, if I have no common good because my “love” is self-love, I am damned.

We don’t take death seriously. I’ve already written about how everything about death except its reality is disappearing. We should not downplay this phenomenon.

That is why Western culture struggled against death, why doctors fought death, and why people took deathbeds, dying, funerals and cemeteries seriously.

But, as the famous 1970 California Medicine editorial observed, we are in the process of eroding the sanctity of life ethic, replacing it with a new one that sees death in friendlier terms, as a solution (to pregnancy, old age, disability, ennui with existence), even a “right.” Through that topsy-turvy lens, we see God as unfair in giving life once and for all, since life begins at conception but does not end. God does not take back His gifts. The culture of death wants a God who, at man’s beck and call, lets him make of his life what he wants and then, as a consequence of the misery he creates for himself, puts him out of that misery by extinguishing his existence. Good people go to heaven; bad people, out of God’s “mercy” (and infidelity to His own gift) cease to be. Ostensibly leaving God in the picture, He becomes simply man’s attendant to a human autonomy gone amok that, nevertheless, wants to throw away human existence like a bad first draft. Not taking death seriously means not taking existence seriously: life becomes the “last enemy” of a man who hates God, his fellow man, and — most of all — himself.

The modern, pseudo-“spiritual” mindset that sidelines religion poses hurdles to understanding hell that earlier times did not face. Those hurdles, however, do not deny the very basic reality that hell exists. Becoming familiar with the intellectual barriers that impede people today from appreciating this dimension of Catholic eschatology is essential if we are to engage modern man. That said, however, we should take the sage advice St. Josemaría Escrivá offers in his spiritual classic, The Way: “There is a hell. Not a very original statement, you think. I will repeat it, then: there is a hell! Echo it for me, at the right moment, in the ear of one friend, and of another, and another” (no. 749).