Piercing the Heart of a Saint 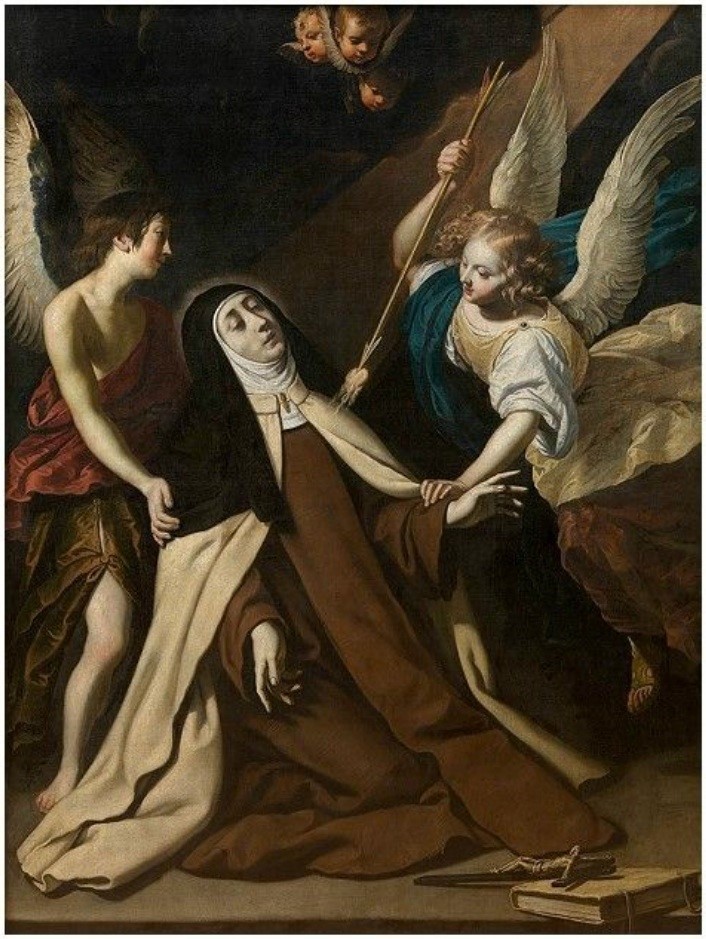 On August 26th, Discalced Carmelites and the community of Apostoli Viae celebrate the feast of the Transverberation (or Transpierecing of the Heart) of St. Teresa of Avila, Virgin, Doctor, and Reformer of the Carmelite Order. The transverberation is a mystical grace wherein the Saint’s heart was pierced with a “dart of love” by an angel.

St Teresa describes this experience in the Book of her Life:

“Our Lord was pleased that I should have at times a vision of this kind: I saw an angel close by me, on my left side, in bodily form. This I am not accustomed to see, unless very rarely. Though I have visions of angels frequently, yet I see them only by an intellectual vision, such as I have spoken of before. It was our Lord’s will that in this vision I should see the angel in this wise. He was not large, but small of stature, and most beautiful—his face burning, as if he were one of the highest angels, who seem to be all of fire: they must be those whom we call cherubim. Their names they never tell me; but I see very well that there is in heaven so great a difference between one angel and another, and between these and the others, that I cannot explain it.

“I saw in his hand a long spear of gold, and at the iron’s point there seemed to be a little fire. He appeared to me to be thrusting it at times into my heart and to pierce my very entrails; when he drew it out, he seemed to draw them out also, and to leave me all on fire with a great love of God. The pain was so great, that it made me moan; and yet so surpassing was the sweetness of this excessive pain, that I could not wish to be rid of it. The soul is satisfied now with nothing less than God. The pain is not bodily, but spiritual; though the body has its share in it, even a large one. It is a caressing of love so sweet which now takes place between the soul and God, that I pray God of His goodness to make him experience it who may think that I am lying.

“During the days that this lasted, I went about as if beside myself. I wished to see, or speak with, no one, but only to cherish my pain, which was to me a greater bliss than all created things could give me.

“I was in this state from time to time, whenever it was our Lord’s pleasure to throw me into those deep trances, which I could not prevent even when I was in the company of others, and which, to my deep vexation, came to be publicly known. Since then, I do not feel that pain so much, but only that which I spoke of before—I do not remember the chapter —which is in many ways very different from it, and of greater worth. On the other hand, when this pain, of which I am now speaking, begins, our Lord seems to lay hold of the soul, and to throw it into a trance, so that there is no time for me to have any sense of pain or suffering, because fruition ensues at once. May He be blessed for ever, who hath bestowed such great graces on one who has responded so ill to blessings so great!”

(ST. TERESA OF AVILA, THE BOOK OF HER LIFE, CHAPTER XXIX.) 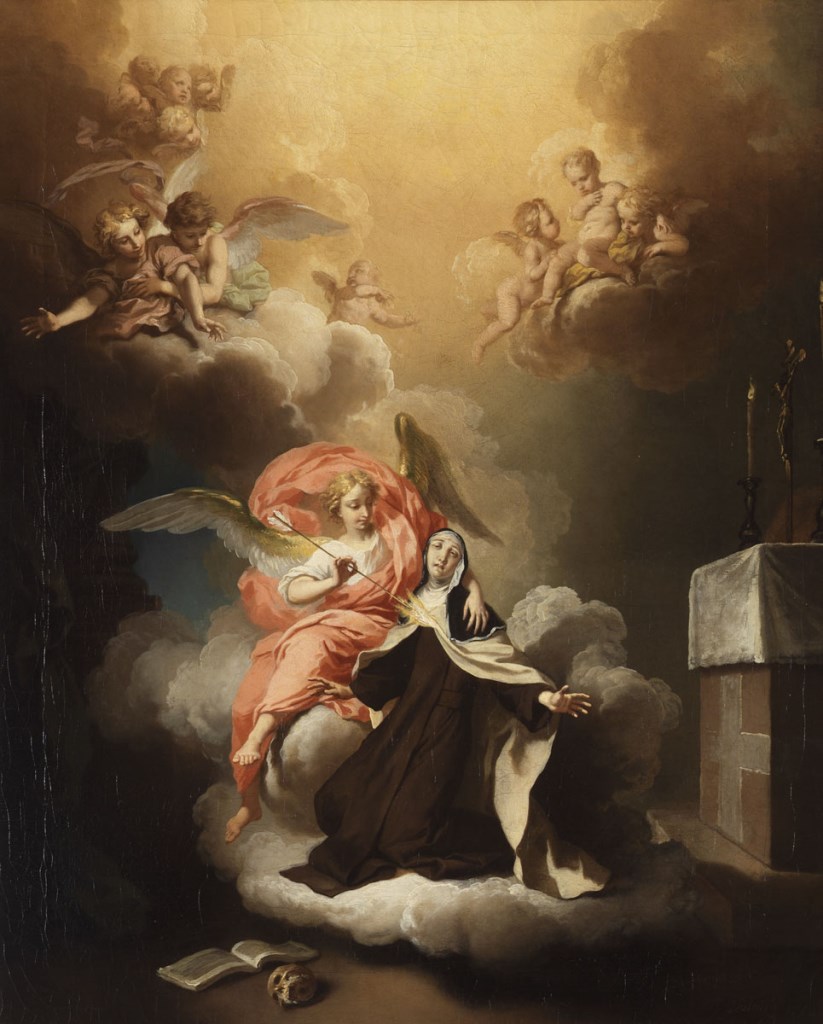 St. John of the Cross explains that this kind of experience happens “while the soul is inflamed with the Love of God, it will feel that a seraph is assailing it by means of an arrow or dart which is all afire with love. And the seraph pierces and in an instant cauterizes this soul, which, like a red-hot coal, or better a flame, is already enkindled. The soul is converted into an immense fire of Love. Few persons have reached these heights.”

As God is good, this one act that literally touched the heart of St Teresa of Avila has gone on to spiritually touch the hearts of millions of people since.

One person, also named Teresa, today, also, a Carmelite saint, is St Teresa Benedicta of the Cross (aka Edith Stein). In 1940, she wrote this sonnet on the occasion of this feast day:

From Heaven’s heights a beam of light here flashes,
He came into the dark depths of my heart,
The soul was wounded by Love’s flaming dart,
Which penetrated all my limbs like lashes.

Transformed since then is my entire being.
Am I no more the same one that I was?
That light has cleared away the dark, because
I am like one who was once blind now seeing.

Deep under me in unsubstantial distance,
I see the world and all the rage of its states,
Its buzzing noise does not reach me in this place.

Eternal stars glow over my existence,
And wondrously a bow of peace radiates,
A gentle sign of God’s great mercy and grace.

The ray of heaven’s light allows me rest not,
Thus what is lighted must become a light.
The Light eternal sends me to earth’s plight:
And so I turn to bear the world now so fraught.

The love of God within my heart burns so deep,
It gladly set the world in whole aflame.
That love is homeless and attracts no fame,
This causes pain and makes the faithful soul weep.

It loves to let the golden stars shine brightly
Into the deepest depths of earth’s darkest vale,
With gentle light to penetrate the dark night.

It wants to join both Heav’n and earth so tightly,
And carry by the Holy Spirit’s strong gale
The world aloft upon His wings into light. 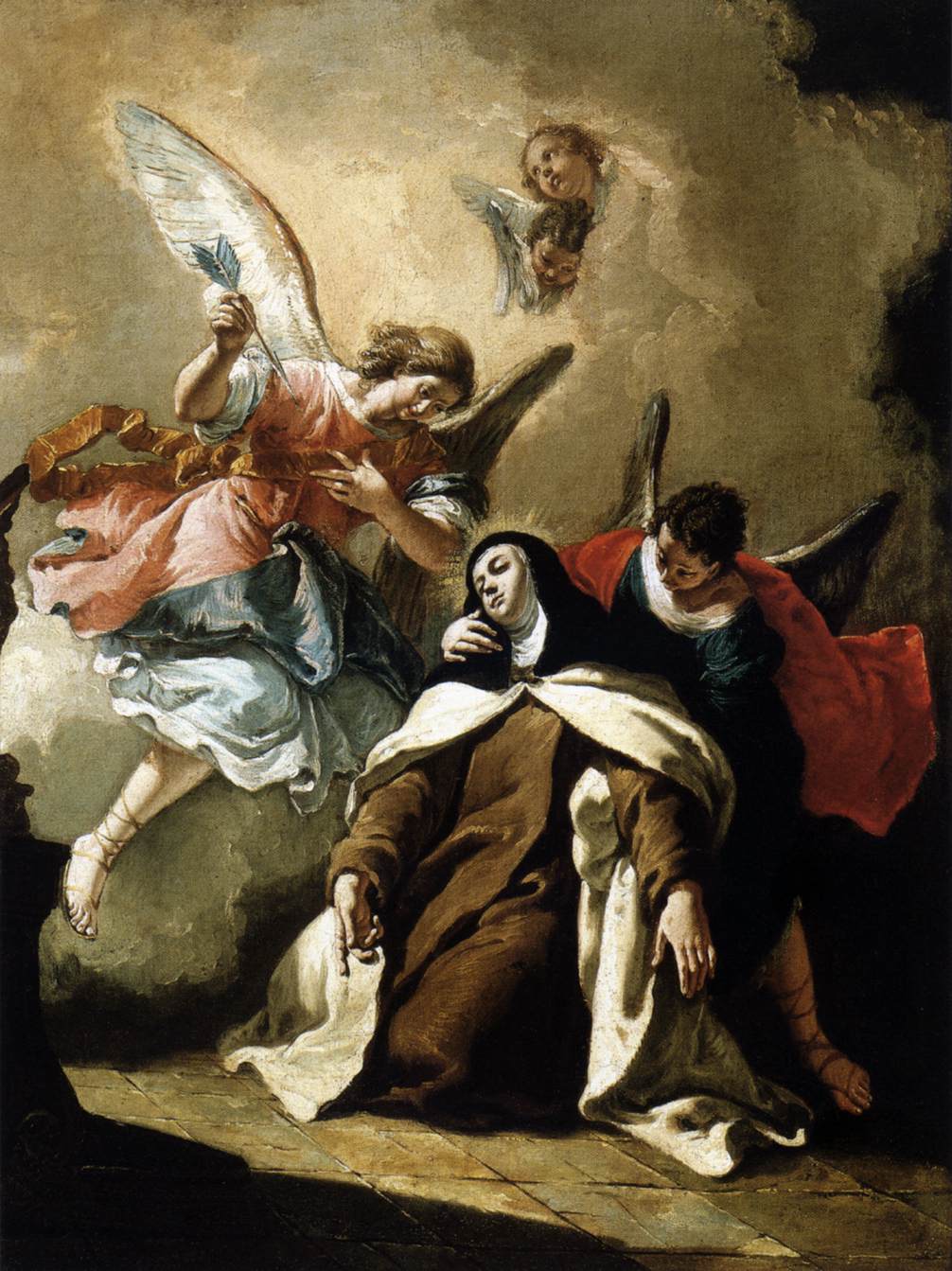 After St Teresa of Avila died in 1582, her body was exhumed and found to be incorrupt. Later, when it was decided that her heart should be removed from her body and placed in a jeweled silver reliquary, it was revealed that her heart had a visible wound from the angel's dart.

This heart, wounded by Christ's love, can be seen today at the Carmelite Monastery of Alba de Tormes in Spain.

Members of Apostoli Viae and Carmelites around the world are clothed in the Holy Scapular of Our Lady of Mount Carmel. May God cover us in the mantle of Our Lady and guide us all along the way that is everlasting, the way tread by our holy sisters in Christ--Saints Teresa of Avila, Teresa Benedicta of the Cross, and so many others.

May our hearts never rest until they rest in Him.
May our hearts be a light to others.
May they burn with His flame,
and set the world on fire with His love.