Is It Okay to Applaud at Mass? Here’s What Four Popes Have Said About It...

Has this happened at your parish?

It is fairly common to experience or hear about people applauding during or at the end of Mass.

Whether it be for the priest after a homily, for a cantor, or even for the choir after the liturgy has concluded. Is this really okay? 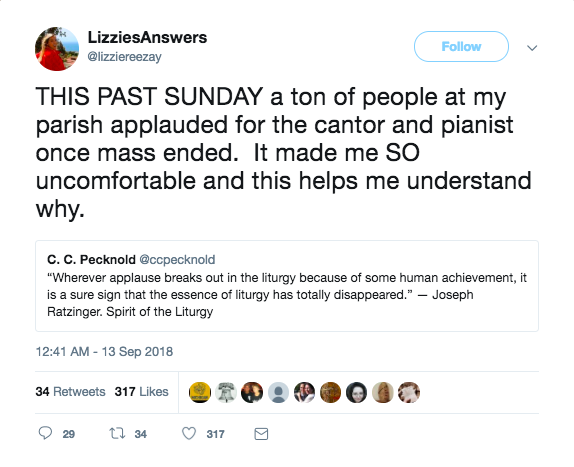 Her tweet reads, “THIS PAST SUNDAY a ton of people at my parish applauded for the cantor and pianist once mass ended. It made me SO uncomfortable and this helps me understand why.”

Below her tweet, she reposted a quote by Cardinal Joseph Ratzinger (before he was  Pope Benedict XVI).

Here’s what he said about applauding at Mass:

“Wherever applause breaks out in the liturgy because of some human achievement, it is a sure sign that the essence of liturgy has totally disappeared and been replaced by a kind of religious entertainment.Such attraction fades quickly – it cannot compete in the market of leisure pursuits, incorporating as it increasingly does various forms of religious titillation." (The Spirit of the Liturgy)

Also, here is a video by Catholic Answers Live that gives us a little bit more perspective on the issue:

In the video, a caller, referring to the parish’s choir asks, “Is it appropriate to applaud for the choir after Mass? Is this an approved practice?”

Fr. Vincent Serpa said, “Absolutely not. It’s most inappropriate and it’s the responsibility of the pastor to make sure that the congregation understands this. The choir is not singing as a matter of entertaining anybody. They’re singing to worship God. We don’t clap for prayer. We pray.”

He continues, “Again, that is not an option. If we were someplace else it would be a different matte.r But Liturgy is liturgy. It’s the worship of God, and it need to be done in an appropriate way as the Church sees fit. It’s good that they appreciate the choir, but they can thank them outside. Applause is not appropriate at that time.”

Fr. Vincent adds, “There are times when that’s called for, as in the ordination ceremony when you are asked to give the response to the worthiness of the candidate for ordination. But this isn’t that. This is something else. You don’t clap at the end of Mass because you had a good time. That’s not what it’s about.”

Pope Saint John XXIII also said as people waited for him to arrive to a church outside of Rome, “I am very glad to have come here. But if I must express a wish, it is that in church you not shout out, that you not clap your hands, and that you not greet even the Pope, because ‘templum Dei, templum Dei.’" (‘The temple of God is the temple of God.’)

In a very powerful quote, Pope Saint Pius X said, “It is not fitting that the servant should be applauded in his Master’s house.” 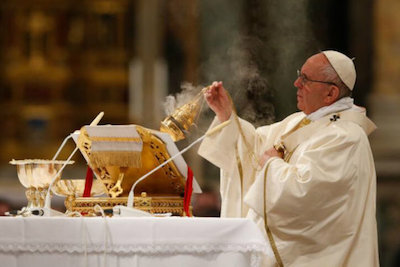 Finally, Pope Francis, not known for his interest in a more traditional perspective on liturgy also called the faithful to silence both before and after Mass, when he said,

“When we go to Mass, maybe we arrive five minutes before, and we start to chitchat with those in front of us,” the Pope said. However, “it is not a moment for chitchat.”

“It is a moment of silence for preparing ourselves for dialogue, a time for the heart to collect itself in order to prepare for the encounter with Jesus,” he said, adding that “silence is so important.”

The bottom line, there is no good reason for applause and chitchat. We spend very little time in the Holy Sacrifice of the Mass and we should use that time to turn our hearts and minds completely to God. We have plenty of time outside of Mass for fellowship and community engagement and applause has its place but it is not within the Mass.

This article has been edited but appeared in its original form in ChurchPop and is used with permission.

72
Contemplative Life - Spiritual Reading Plan
Have you ever wanted to have a reading plan but worried about what you should actually read, that is in keeping with the magisterium, and is truly helpful with respect to where you are on your spiritual journey? This is why I created this reading plan. As well this plan follows the general path of formation of Apostoli Viae. Just reading books cannot make you a saint. In fact, when consumed without spiritual direction, gluttonous reading can lead to pride and mere external knowledge that results in more harm than good. Even so, when we read books in concert with our spiritual director and in keeping with our current spiritual state, they can serve as stepping stones to heaven.  This plan is meant to be read stepwise beginning with the Catechism, then Into the Deep, then Scripture, then the Better Part, then Thoephilos, etc. There are a few books on prayer and spirituality that I did not include but are important because of destructive modern trends, these are A Catholic Guide to Mindfulness by Susan Brinkman and Is Centering Prayer Catholic? by Conni Rossini. Otherwise, the books on this reading plan are all positive proposals of the teaching of the Church and the wisdom of the saints. A few other notes are in order 1) the books in blue are books I have written and 2) the books with bold titles are for daily meditation.  Important: Be sure to use the links I have provided below. There are translations of important works that deeply distort the intended meaning of the authors. Yes, folks actually do this. As well, there are translations that are well intended but that really miss the mark. To help you find the right versions of these books, I have provided all the links below. Yes, it took a lot of work to do this. If you are appreciative, please donate to Apostoli Viae HERE. Catechism of the Catholic Church Into the Deep - Finding Peace through Prayer -  by Dan Burke Scripture - New Testament Reading - The Ignatius Catholic Study Bible The Better Part - Fr. John Bartunek Theophilus - Michael O'Brien Corpus Christi - Holy Communion and the Renewal of the Church - Bishop Athanasius Schneider (Out of Print) Time for God - Fr. Jacques Philippe Introduction to the Devout Life - St. Francis de Sales A Devotional Journey into the Mass - Christopher Carstens Confession - Its Fruitful Practice Contemplative Rosary - Dan Burke and Connie Rossini Seven Deadly Sins - Kevin Vost Thirsting for Prayer - Fr. Jacques Philippe Navigating the Interior Life - Dan Burke Q&A Guide to Mental Prayer - Connie Rossini Spiritual Warfare & the Discernment of Spirits - Dan Burke Searching for and Maintaining Peace - Fr. Jacques Philippe 30 Days with St. Teresa of Avila - Burke & Lilles Living the Mystery of Merciful Love - Burke & Lilles Her Life - St. Teresa of Avila Fulfillment of all Desire - Ralph Martin Finding God through Meditation - St. Peter of Alcantara Soul of the Apostolate - Dom Chautard The Sacrament of the Present Moment - Fr. Jean Pierre de Caussade Discernment of Spirits - Fr. Timothy Gallagher Divine Intimacy - Fr. Gabriel of St. Mary Magdalen The Way of Perfection - St. Teresa of Avila Humility of Heart - Fr. Cajetan Mary da Bergamo Spiritual Canticle - St. John of the Cross Fire Within - Fr. Thomas Dubay I Want to see God - Fr. P. Marie-Eugene Interior Castle w/Commentary - Teresa of Avila - Dennis Billy Fire from Above - Anthony Lilles Union with God - Fr. Gabriel fo St. Mary Magdalen Impact of God - Fr. Iain Matthew I Am a Daughter of the Church - Fr. P. Marie Eugene Ascent of Mt. Carmel - St. John of the Cross Spiritual Consolation - Fr. Timothy Gallagher Collected Works - St. John of the Cross Happy are You Poor - Fr. Thomas Dubay
99
Carmelite Spiritual Warfare Prayer - Carmelite Invocation
Come Holy Spirit with Thy Seven-fold gifts and anoint us with Thy Divine light, wisdom, and power. Come Lord Jesus Christ and anoint us with Thy Precious Blood, freeing us from every snare and stronghold of the principalities and powers of darkness. O Mother of God, glorious and Immaculate ever Virgin Mary, come and crush the head of the ancient serpent. O great father, St. Joseph, terror of demons, come and annihilate the enemies of our souls. St. Michael, great prince and commander of the heavenly army, strike down the insidious foes who seek to destroy us. Come glorious band of the Apostles, come great patriarchs and prophets; come white-robed army of Martyrs, come pure and noble throng of Virgins. Come to our aid Holy Mother St. Teresa, our Holy Father St. John of the Cross, St. Elijah, St. Elisha, St. John the Baptist, St. Therese, St. Elizabeth of the Trinity, all you saints of Carmel, our Guardian Angels, Archangels, and all you holy Angels and Saints, come repulse the attacks and deceits of our wicked enemies; render them impotent and helpless. Let God arise; let His enemies be scattered and let all those who hate Him flee before Him. As smoke is driven away, so are they driven away; as wax melts before the fire, so the wicked perish at the presence of God. Amen.