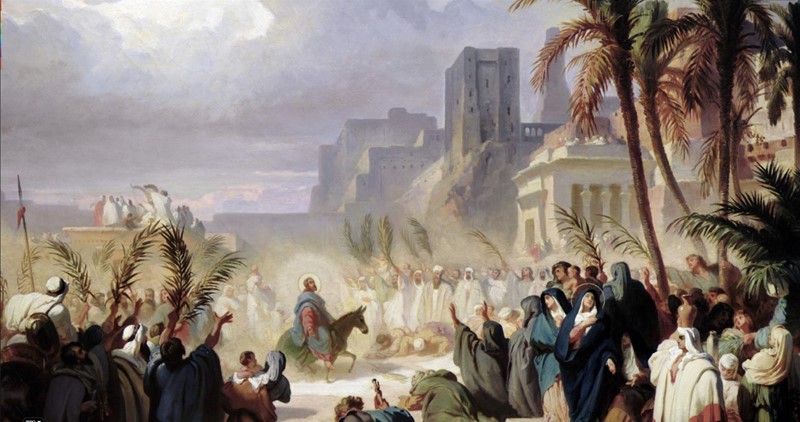 If Today You Hear His Voice...

“Just as what brings heat make things expand, so it is the gift of love to stretch hearts wide open; it is a warm and glowing virtue…For there is nothing which so draws a man to return love, as when he understands that he who loves him is urgently longing for his affection.” - St John Chrysostom

Early in the morning of this day, Jesus sets out for Jerusalem, leaving Mary, his Mother, and the two sisters Martha and Mary Magdalene, and Lazarus, at Bethania. The Mother of Sorrows trembles at seeing her Son thus expose himself to danger, for his enemies are bent upon his destruction; but it is not Death, it is Triumph, that Jesus is to receive today in Jerusalem. The Messias, before being nailed to the Cross, is to be proclaimed King by the people of the great City; the little children are to make her streets echo with their Hosannas to the Son of David; and this in presence of the soldiers of Rome’s Emperor, and of the High Priests and Pharisees—the first, standing under the banner of their Eagles; the second, dumb with rage.

The Prophet Zachary had foretold this Triumph which the Son of Man was to receive a few days before his Passion, and which had been prepared for him from all eternity. Rejoice greatly, O Daughter of Sion! Shout for joy, O daughter of Jerusalem! Behold thy King will come to thee; the Just and the Savior. He is poor, and riding upon an ass, and upon a colt, the foal of an ass. Jesus, knowing That the hour was come for the fulfillment of this prophecy, singles out two from the rest of his Disciples, and bids them lead him to an ass and her colt, which they would find not far off. He had got to Bethphage, on Mount Olivet. The two Disciples lose no time in executing the order given them by their divine Master; and the ass and the colt are soon brought to the place where he stands.

The holy Fathers have explained to us the mystery of these two animals. The ass represents the Jewish people, which had been long under the yoke of the Law; the colt, upon which, as the Evangelist says, no man yet hath sat, is a figure of the Gentile world, which no one had ever yet brought into subjection. The future of these two people is to be decided in a few days hence: the Jews will be rejected for having refused to acknowledge Jesus as the Messias; the Gentiles will take their place, be adopted as God’s people, and become docile and faithful.

The Disciples spread their garments upon the colt; and our Savior, that the prophetic figure might be fulfilled, sat upon him, and advances towards Jerusalem. As soon as it was known that Jesus was near the City, the Holy Spirit worked in the hearts of those Jews who had come, from all parts, to celebrate the Feast of the Passover. They go out to meet our Lord, holding palm branches in their hands, and loudly proclaiming him to be King. They that had accompanied Jesus from Bethania join the enthusiastic crowd. While some spread their garments on the way, others cut down boughs from the Palm trees, and strewed them along the road. Hosanna is the triumphant cry, proclaiming to the whole city that Jesus, the Son of David, has made his entrance as her King.

Thus did God, in his power over men’s hearts, procure a triumph for his Son, and in the very City which, a few days after, was to clamor for his Blood. This day was one of glory to our Jesus, and the holy Church would have us renew, each year, the memory of this triumph of the Man-God. Shortly after the Birth of our Emmanuel, we saw the Magi coming from the extreme East, and looking in Jerusalem for the King of the Jews, to whom they intended offering their gifts and their adoration: but it is Jerusalem herself that now goes forth to meet this King. Each of these events is an acknowledgement of the Kingship of Jesus: the first, from the Gentiles; the second, from the Jews. Both were to pay him this regal homage before he suffered his Passion. The Inscription to be put upon the Cross, by Pilate’s order, will express the Kingly character of the Crucified: Jesus of Nazareth, King of the Jews. Pilate—the Roman Governor, the pagan, the base coward—has been, unwittingly, the fulfiller of a prophecy; and when the enemies of Jesus insist on the Inscription being altered, Pilate will deign them no answer but this: What I have written, I have written. Today, it is the Jews themselves that proclaim Jesus to be their King: they will soon be dispersed, in punishment for their revolt against the Son of David; but Jesus is King, and will be so forever. Thus were literally verified the words spoken by the Archangel to Mary, when he announced to her the glories of the Child that was to be born of her: The Lord God shall give unto him the throne of David, his father; and he shall reign in the house of Jacob for ever. Jesus begins his reign upon the earth this very day; and though the first Israel is soon to disclaim his rule, a new Israel, formed from the faithful few of the old, shall rise up in every nation of the earth, and become the Kingdom of Christ, a kingdom such as no mere earthly monarch ever coveted in his wildest fancies of ambition.

Harden Not Your Heart

That was the day I started to believe in Jesus. Up until then I was convinced that he deserved to be silenced.

But I was standing on the city walls when he came to Jerusalem, and I watched the crowds behind and before him surge together like two great tides colliding. As he approached, I could see his face.

The look he gave them wasn’t the look of a power-hungry and self-absorbed demagogue. It was calm, glad, and, well, it sounds rather anticlimactic, but I think the best word to describe it is -

The irrepressible ebullience of that immense mass of humanity would have made any normal man drunk with their adoration.

And for some reason, I recognized immediately why he was riding on the donkey. I had just been meditating on the prophesy of Zechariah that described how the Messiah would enter into his reign just this way.

I had a kind of intuitive flash as I watched him make his way slowly and gently through the forest of palm branches and the din of cheers. I seemed to see that this was the first swell of something entirely new, of a Kingdom that would surpass all of our small and antiquated expectations.

And then – you may not believe me, but I promise you, it’s true – then, just before he passed through the gate, he looked up, and his eyes met mine. His gaze gripped me and shone right through me as sunlight shines through glass; I couldn’t resist it, but I didn’t want to. It was just for a split second.

And with that look he said to me,

– just as if he had known everything I had been thinking while I watched his triumphal entry!

And he had known it.

He knew it all, because in his mercy and love he had been inspiring those thoughts.

From that day forward, I believed.

--from Bartunek, Fr John. The Better Part: A Christ-Centered Resource for Personal Prayer. Used with permission.